The 2021 AGM adopted a new constitution for the Society which updated the previous one and gave the Society the correct footing for online banking with HSBC. Sadly, HSBC then terminated free banking to all not-for-profit organisations. The Society needed to find ways to minimise banking costs and opened a second online account, this time free with NatWest.

The new annual subscription rate of £10, agreed at the 2021 AGM was advertised from January 2022 with the help of a new ‘Join today!’ flyer attracting new members and encouraging existing members not only to increase their standing orders but to make them payable to the new NatWest account. By the end of May 2022 394 members made those changes, but 271 continued to pay £5 or less (£4 was an annual rate from yesteryear) to HSBC. Some life members also contribute. In the coming year, the Society will need to ask members who are paying the lower rates to make the necessary changes. Already, membership numbers and income from subscriptions are increasing. At the moment, The Westminster Society is on a stable financial footing.

The AGM was held during the 2021 Reunion and BA celebration which was very well-organised by the Reunion team, and was full of enthusiasm and joy. Oxford Brookes University was so impressed that it decided to extend the time when former 3-year students could apply for the BA award. The Society’s regular email newsletters announced the news and now a total of 597 former students have applied and received certificates. The process also enabled updating of the Society’s alumni list (‘WestBase’) and the recruitment of new members. A Membership team has enabled more contact with pre-1959 members and detective work on students from the 1980s whose details are missing from college records.

The Area links team of coordinators met via Zoom to take stock of the way Covid and lockdowns not only prevented area links from taking place, but also led to a continuing wariness about joining meetings. In March this year, the Society piloted a Zoom meeting for members in the North-East of England which attracted a handful of members and went well. If reluctance to attend in person persists, it is possible that virtual meetings (not necessarily area-based) may need to be explored more widely.

The Westminsterian magazine was published in February 2022, but its distribution was marred by the loss of 15% of the magazines by the printers - discovered only by members questioning why they had not received a copy. By the end of June 2022, the Society had resolved the matter for most people involved. When members did receive their copy, a number expressed appreciation for its variety of content and wider use of photos. A new Communications team is already compiling material for the 2023 issue and starting to consider how the website might develop. The website now includes additional material for the magazine and is also where obituaries can be posted throughout the year, rather than annually in the magazine.

The Westminster Society has been exploring further possible developments, trialling merchandise, considering ways members might discuss issues, and looking at how the legacy of Westminster College (contributions to society by students and staff) might be celebrated and recorded.

This report deliberately concentrates on the action taken and the issues faced this year. It mentions no-one by name, but everything it does needs a volunteer to do it, and it is good that an increasing number of members are volunteering to play a part. We are all volunteers whether on the General Committee, serving as the Executive, being members of a team - for the Reunion, for Membership, for Area Links, for Communications. Thank you all for enabling The Westminster Society to flourish!

Please be a volunteer! You already know that Ws are fun to be with! How about joining a team? The Communications team would value experience in websites, emailing, and publishing. The Membership team would like help in making phone calls to members, writing up their stories, and tracing those not yet on our list. The Area links team would like to see activities in new areas / in new ways, and the Reunion team relies on additional help to run its activities. So please contact us: WestminsterOxfordAlumni@gmail.com The more the merrier!
The Westminster Society
Minutes of the Annual General Meeting held on Saturday 2 September 2022 at 5pm.

After a 132 seconds quiz to mark the 132nd AGM of Westminster College alumni, the meeting opened.

The annual report, already available for members in the paperwork for the meeting, was received.

The financial statement, also in the paperwork and introduced by David Gibbs was approved. David reported that over 300 members had not yet adjusted their membership standing orders to the £10 rate agreed unanimously at the 2022 AGM and had not yet transferred their membership payments from the Society’s HSBC account which incurs charges to its new free-banking account with NatWest.

In his membership report, Peter Steadman outlined how the printers had failed to send copies of The Westminsterian magazine to 100 members. Thanks to Tom Dobson and Derek Gillard the Society has rectified the printers’ error. During 2022-23, the Membership team will continue to encourage members to raise new standing orders to the correct rate and to the free account. Christine Crowther (Gollins) ’65 would be phoning members about that, and another volunteer would be very welcome. Meanwhile, Ann Darley Cook (Darley) ’71 would be keeping in touch with our Horseferry Road contingent, and some of the early years leavers after College moved to Oxford.

In his closing remarks, Peter Relf highlighted how the pandemic had made many members reluctant to meet in person, adversely affecting Area Links. He was grateful that Margaret Baldry was arranging an East Anglia event on 15 October 2022. He also mentioned the possibility of a Legacy project which could record how students and staff of Westminster College had contributed to society over 150 years. He thanked Dave Haigh and Sylvia Clift (attending the meeting via Zoom) for their significant part in making BA awards and celebrations possible, and he thanked the Reunion team led by Mary Lines for organising another enjoyable reunion.
​
The meeting closed at 5.15pm

Chair - Peter Relf writes:
​I had a great time at Westminster and particularly enjoyed music-making and staging theatre productions. This was excellent preparation for teaching music in Hillingdon, Doncaster, Mexborough and Mansfield. I gained a BA degree with the Open University and then supported vocational education in Derbyshire and Nottinghamshire. With an MBA from the OU, I worked for the Methodist Church, first regionally and then nationally before retiring.

Secretary - Mary Lines writes:
​I enjoyed college life and have many happy memories. I remained teaching in Early Years in Oxfordshire, until retiring. Living in North Hinksey, I have maintained links with the College over the years. I joined the Westminster Society after becoming a trustee of the Westminster College, Oxford Trust who are appointed by the Methodist Church as the managing trustees of the Harcourt Hill site.

Treasurer - David Gibbs writes:
​At Westminster I studied music. My teaching career began in primary schools, continued on secondary, leading to head of department posts and to the school gaining performing arts specialist status. I was involved in teacher training through the school’s links with Bath Spa University. I have performed and directed music in educational and church settings, including 30 years as Director of music for church work with Christian Radio.

Membership officer
Peter Steadman writes:
​A year in France, then Leicester, proved enough teaching for me. I went into magazine publishing, installed the firm’s first computer, and grew with the business, retiring early as Database and Distribution Director. Music, especially singing, has always been part of me, and nowadays I run weekly lunchtime concerts in Letherhead Methodist Church. 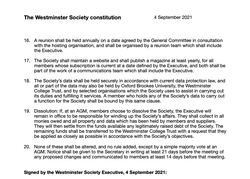 The Westminsterian began life as the in-college magazine, produced several times a term. The earliest copy in the archive dates from 1892.

The Westminster Bulletin was produced from 1925 to 1977, first as the alumni magazine of the Westminster Club which at some point became the Society it is today. When was that?

Incidentally, the Bulletin followed on from the War Bulletin, which The Principal edited from 1914 to 1918, for Old W's on active service or recovering from war wounds.

Please look at your own back copies or archives of these magazines. It would be good to complete the College archive, and to see in what year these changes took place. Have a sort out before those eager young recyclers move in on you!